Blog
You are here: Home1 / Blog2 / Uncategorized3 / Commentary of The Leasehold Reform Legislation 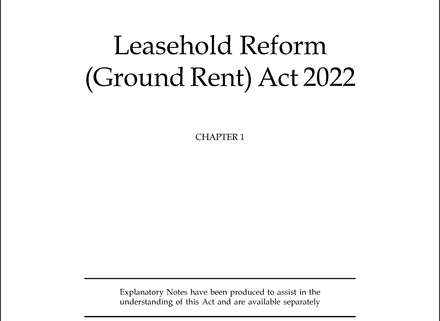 The Government is in the process of implementing a two stage reform of the leasehold system in England and Wales. The purpose of the reforms is to make leasehold property fairer and more affordable for homeowners.

The first of the reforms is the new Leasehold Reform (Ground Rents) Act 2022.

The purpose of the Act is to prohibit landlords from charging ground rents for all new leases (referred to as ‘regulated leases’ under the new legislation). There are exceptions to this rule; for example, the rules do not apply to shared ownership leases and business tenancies.

The rules apply only to long leases which are defined in the new legislation as any lease granted for a period of 21 years or more.

The new legislation does not apply to statutory lease extensions to flats under the Leasehold Reform, Housing and Urban Development Act 1993 because the legislation automatically converts rents to a peppercorn (zero) under the current legislation.

Moreover, the new legislation does not affect statutory lease extensions for houses under the Leasehold Reform Act 1967 because the legislation permits leaseholders to extend their leases for 50 years with no premium (without cost) and, although landlords have the ability to charge ground rent under this legislation, the government feels that this is fair for landlords, as tenants do not have to pay a premium for extending their leases.

New Lease extensions that have been voluntarily agreed between landlords and tenants are able to contain normal rent provisions; however, the rent payable can only apply for as long as the original term would have been in place. The rent must be a peppercorn for the part of the term that has been extended.

The responsibility for enforcement of the new legislation will fall onto the local weights and measures authority or the district council and they have the authority to impose fines of between £500 and £5,000. In addition, the enforcement authorities have the ability to order that the prohibited rent is returned to the tenant.

The main provisions of the new legislation will not come into effect until specified by Regulations made by the Secretary of State. There was some concern raised by Members of Parliament that the new Act would be delayed in its implementation. The government has shown a commitment to bring the legislation into effect within 6 months of the Bill receiving Royal Assent.

A Warning to Tenants

As the Act passed through parliament, there were concerns raised about unscrupulous landlords trying to encourage tenants to extend their leases before the new legislation comes into effect in order to try to get around the new rules.

There were also concerns raised that landlords could try to recover the loss of rent through other means; such as, charging fees through service charges. In response to this point, the Government said that the definition of rent within the new legislation has been drafted broadly in order to allow the Tribunal to step-in and prevent landlords from attempting to collect any funds from the tenant that could constitute a payment of rent regardless of whether it is masquerading as a service charge.

In the next parliamentary session, the Government is planning to introduce sweeping changes to the process of extending leases and the leaseholders’ right to purchase the freehold of the building (otherwise known as enfranchisement).

Under the proposed reforms, tenants would be able to require lease extensions of 990 years from their landlords at any time.

The Government is also planning to place a cap on ground rent considerations when assessing the premium payable for extending a lease or purchasing the landlord’s freehold interest. Under the current rules, premiums are determined by calculating how much rent the landlord would be missing out on if the lease was to run for the entire original term. The new reforms will cap this rent calculation at 0.1% of the value of the freehold which should result in cheaper premiums for tenants.

Finally, many leases have already been extended for long terms (such as 999 year leases) with high ground rent provisions. The proposals will allow leaseholders to buy-out the ground rent within their leases without the need to extend the term.

At Owen Kenny, we pride ourselves on being able to assist clients with many aspects of leasehold property; including: leasehold purchases, shared ownership leases, voluntary and statutory lease extensions and enfranchisement. If we can be of any assistance, our conveyancing department would be happy to help you with any queries that you may have.

At what age can a child decide who to live with?