Amusing times in the workplace

You are here: Home1 / Blog2 / Legal Blog3 / Amusing times in the workplace

Amusing times in the workplace: Paul Fleming, our Civil Litigation Solicitor at Owen Kenny, shares his “Life in the Law” with us here-

” ‘Making a difference’, is certainly one of the great features of the job but it is also not without its amusing times as well. I’ve witnessed barristers corpse-ing in the middle of a hearing when they found themselves arguing pedantically over the division of a schedule of household items, including a toothbrush. I’ve had a prospective personal injury claimants ring me straight after an accident, before they’d even sought medical attention.

I had a claimant who suffered broken toes when a frozen turkey tore through the shopping bag as he was carrying it out of the shop. We won compensation for him (the bag was far too flimsy) but the thing I remember best from that case was the fact that the deceased turkey managed to increase in weight as time went by. It was recorded as 8lb in the shop’s accident report book, 9lb at the A & E department, 10lb when he first came to see me and he later corrected my draft Letter of Claim to say 11lb. And when I asked him what had happened to the turkey after the accident, he answered “I ate it.”

Perhaps the funniest accident involved a tenant who was sitting on his toilet when it fell through rotten floorboards. Oddly, the injury was to his head because, as the toilet dropped, he instinctively grabbed for the vertical pipe behind him, which came off his hand, causing the cistern to drop on his head. I couldn’t help remarking at the first meeting that, looking on the positive side, he’d been in an ideal place for a very scary experience.

Finally I have to mention the Thank You card I once got. It said inside, ‘Thank you for dealing with my case and for all your kidneys’. My boss, who opened the envelope, came down to my office and told me in a somewhat bemused state that, although he wanted me to provide a good service for our clients, that was probably taking it too far.” 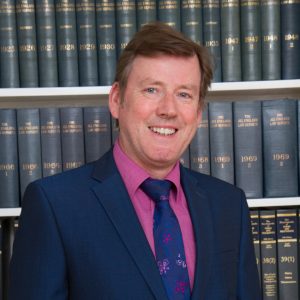 We hope  that you  have found this post useful, but if you require any further information on this subject or the fees we charge, including fixed fees, please do not hesitate in contacting our team via email on info@owenkenny.co.uk or call her on 01243 790532.

Going above and beyond

Profile of our Commercial Property Solicitor, James Sandbach, talking about...